Our precious daughter Tova, was born at 24 weeks. She spent her first 5 and a half months in hospital. Of those, 4 and a half were spent in NICU and one month in special care.  At birth she was a little 553grams.She was hooked up, tubed, plugged in, poked, prodded, tested, pricked, studied, kept warm and humid. She successfully fought hard for her life.

Because of all the tubes and trauma of being in NICU, Tova developed an oral aversion, was always full from being tube fed and refused to eat. By the time she came home, she was completely Tube Dependent. Tube dependency was never mentioned to us as a drastic side effect of tube feeding. She was fed by a Naso-Gastric tube for the first year or so of her life, followed by a PEG tube inserted directly into her stomach.

Tova had never eaten with her mouth until we visited a weaning program in Graz, Austria during January 2010! After 4 weeks in their program we gained a 100% oral feeding baby! Our next step is to get her chewing. It is now 2014 and yes Tova eats, everything has to be pureed or lumpy or she won't eat it. The next stage of learning took place in Canada where we attended a Conductive Ed program for 5 weeks. Once returning home we did a simmilar program in Adelaide during Jan 2014. Stem Cell therapy has been researched and I may or may not discuss that on this website. 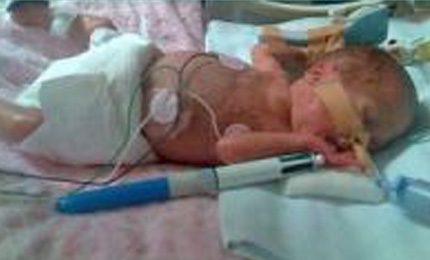